View Round the world in about 365 days!! on machine's travel map.

When I eventually landed in Sofia, Bulgaria I got my hire car and put in the destination to my trusty Tom Tom, that was until Bulgaria.... The S*it S*it as it is now to be known, took me on some of the most treturous roads and mountain passes I have ever driven on, I knew it didn't seem right, but just had to rely that it would get me there in the end. It was snowing quite a bit and the roads had a fair amount of snow on, I did think on a number of occasions that it would probably be wise to put the snow chains on, but it was nearly midnight so thought I would just crack on! The trusty Renault got me there in the end and I managed to find the 'Hotel'!

The hotel was quite a quaint little farm at the middle of a very snowy track about 12 km from Bansko, it provided quite a nice base so that I could inspect the apartment that I am in the process of buying.

The next morning I got up nice and early for breakfast, which ended up been cheese omelette as that was about the only thing the lady could understand. I then drove up to Bankso to give the apartment a once over, it was a glorious sunny day and all the trees were loaded with snow. Wished that I had my snowboard with me!!

Took a good luck over the apartment, they still have plenty of work to do, but on the whole the apartments seem OK and especially happy with my view; 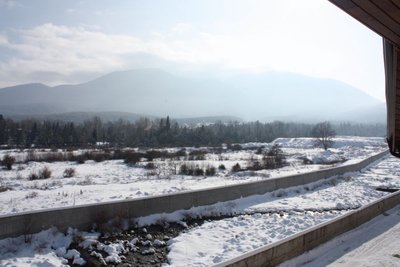 Had a walk around the village afterwards and even treated myself to a chicken kebab, they actually put chips in it too! I also had a look through the clothing stores and got myself a bargain new snowboarding jacket and pants, having just one set of clobber was starting to become an issue.

That evening I ate in the 'hotel' and had one of the many Bulgaria stews on the menu, all in all it was pretty nice. I finished the evening off with a sauna, though the sauna looked like a garden shed with a few electric heaters fixed onto the inside! The guy even put one of those picture frames with a running waterfall and calming noises of birds in the background... The sound coming out of it reminded me more of a drowning cat (sorry Jinksy), i didn't have the heart to turn it off as I didn't want to offend!

Drove to the airport the next day, this time the S*it S*it took me the right way. On the way it started snowing again! By the time I got to the airport it was really coming down!! I prepared myself for another long wait in the airport, luckily the Bulgarian's didn't seem to be as worried about clearing all the snow as the Italians did and we were soon up in the air!! Got sat next to some Bulgarian who's breath smelt like he had eaten horse manure that morning, I really felt like asking him to get some tic tacs or something!