Heading to Bulgaria via Italy

View Round the world in about 365 days!! on machine's travel map.

So the plan was to rest my back a little, go to Bulgaria and check out how finished the ski apartment I am in the process of buying in the resort of Bansko was. So my predicament, it was Saturday in Chamonix and my heater had packed in the night before, it was baltic in Chamonix.... My flight to Sofia, Bulgaria wasn't until the Tuesday morning, so do I stick around twiddling my thumbs in the freezing cold or do I go on a road trip?

The road trip won hands down. I set off from Chamonix about 18:00 and decided to take the route through the Mont Blanc Tunnel, mainly because with my season pass the toll for going though the tunnel is just 11 euros! After I queued for nearly two hours I eventually reached the toll booths, when I gave the guy my season pass he looked puzzled and mumbled something about needing a different ticket! Basically I was meant to get my cheaper ticket in Chamonix village, as I handed over 44 euros, that's 44 pounds for those of you that do not keep up to date on exactly how poor the euro it to the pound at the moment. I can honestly say I think I actually wept as I gave over the money.

The tunnel itself is actually very impressive at 11.6 km long, they even gave me a free DVD about how it was built, though I would have preferred a few quid off the ticket price if I am honest! One strange thing was inside the tunnel it was actually really really warm and all the ice and snow that was on Bertha started melting, this started me thinking and more to the point hoping that the tunnel would melt the frozen diesel (if that's what the problem is), a magic tunnel in my books! On existing the tunnel I stopped at my earliest convieance to see if the heater would fire up, she did!! All of a sudden that 44 euros seemed like money well spent, after all I was heading to Milan and I was hoping for it to be a little warmer, but I was pretty sure that whilst Milan enjoys great summer months they also enjoy a nice cold winter!

I took the opportunity of stopping to fill up the mini hot water bottle that my friends Laura & Kelly bought me as a travel present!! At the time I said the obvious and gestured at its nice fit down my trouser front, as it happens it was a perfect fit for the back of my trousers, just where I had the back pain. So thanks girls, top present! I continued driving and eventually pitched up in what seemed like a quiet housing estate in, no sooner had my head hit the pillow I heard a cockrill doing what they do best, this followed by what seem to be a crescendo of cocka doodle do's, been the ever optimist I thought that they might calm down..... I think it was 5:30 am when I moved Bertha elsewhere!! I also tried to turn the heater on, unfortunately it had stopped working AGAIN!!

Got up in the morning and had a drive around, as it happens I had camped up directly next to the San Siro stadium. Parked up and got the metro to Duomo to see the Milan Cathedral; 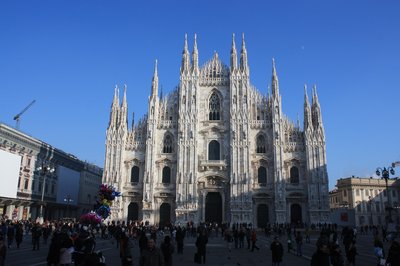 As nice as Milan is, with its great winters and great summers there didn't seem to be too much to do, except the odd museum and picture gallery and I certainly wasn't in the mood for traipsing round museums on my own! So Italy in general seems a really nice place, my only problems so far was that not many of them spoke a word of the queens English! I know many of you will think, well to be fair I was in their country and they shouldn't have to and I would agree with you. My comment is mealy I don't know how people can get through life without having at least a basic concept of the English language, its pretty much everywhere you look, films, music!

One other comment about the Italian people is that I found them terrible and very aggressive drivers who don't even know the meaning of a red light. Whilst on the Italian traffic light system, I would love to know what an eternal flashing amber light was? After sitting at one for a about 5 minutes any further lights such as these I interpreted as pretty much green for go!!

When I got to Milan from what other people have said I expected it to be wall to wall, hot chicks!! Now lets just say I was very disappointed I would definitely say with all their gold bling, shiny puffa jackets and words like GUESS plastered all over them. There are more hot women in the White Rose Centre in Leeds per square meter than there are in Milan! I am pretty sure it was my friend Gunny that gave me tip about the women been hot... Maybe that explains a lot... :-)

Though I must admit I didn't see a man that wasn't sporting a very nice pair of leather shoes! So they have got some things right!

Now I don't think I have many Italian friends or friends with Italian blood and I am generalising and don't mean to cause offence but... I found most Italians very offensive and not polite whatsoever, they certainly don't posses any queueing skills! Saying that maybe that's just my English perspective?

Later that afternoon I got back to the Van and tried the heater again, still no joy! The thought of spending the next few hours in the van without any heating didn't fill me with confidence, so I decided to hit the road again!! With the engine running and blowers blowing Bertha was not such a cold place to be. Next port of call Lake Garda.

Rolled into Garda late that evening, it has been some of the worst conditions I have driven in before, in terms of fog! Pitched up for the night and when I opened the curtains that morning had a pleasant surprise in that it was a glorious day! 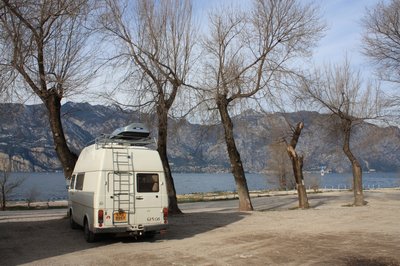 Popped into the tourist information and got some ideas of things to do around Lake Garda, a very polite (so they do exist) lady behind the desk gave me some good ideas and I headed up to Malcesine a bit further up the lake. Along the way some of the scenery was breath taking; 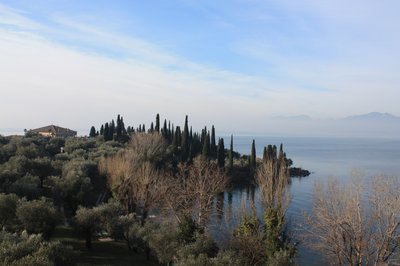 The idea behind driving to Malcesine was to go up the cable car to the top of the mountain there call Monte Baldo, up on the top people were skiing and snowboarding and there were some great views of Lake Garda to be had; 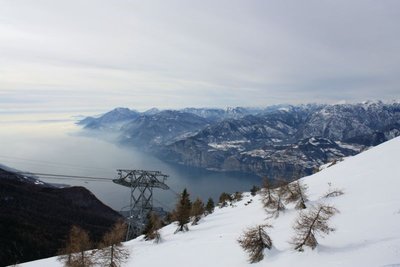 In general I found Lake Garda to be a really nice picturesque place and I am pretty sure I only scratched the surface. I expected it to be very much like our own lake district but in reality it was a cross between the lakes and Blackpool. Lake Garda had it quaint little villages and breath taking views; 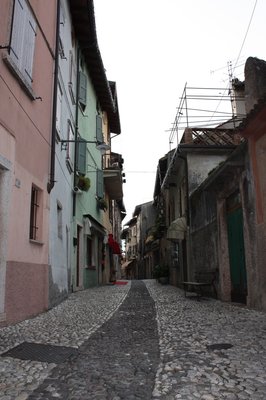 But it also has Movieland Studios, Sealife World and even their very own type of Tuk Tuk. The theme parks both had their fair share of high octane roller coasters and various other rides!! Now I would have never associated white knuckle rides with somewhere like Lake Garda! I think I was also pretty lucky in that I was there during their winter months and is had been a really nice day, I can imagine in Summer the place would be packed with tourists it might take the appeal off the place for me slightly!

Drove back to Milan that evening to be nearer the airport, as I got my head down for the night I heard some rain or thought I heard some leaves rubbing against the van roof, when I awoke in the morning to get ready for my flight You can imagine how surprised I was to see this; 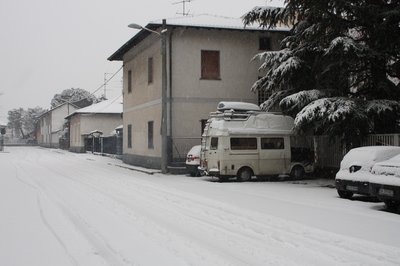 About 4 inches of snow had fallen and I had to get to the airport, luckily Big Bertha made it without me having to put my snow chains on. When I got to the airport the plane was delayed for an hour, I thought not bad considering! At 17:30 we eventually got off the ground, my flight was due to set off at 11:05!!!! Communication and availability of basic food and water in the airport was non existent and we had no indication of what was happening, watch this space for a copy of the complaint email to Stelios Haji-Ioannou of Easyjet!! In checking the correct spelling of his name and I have also found out that he has now been made a sir..... What the f*ck is the world coming to?? Sorry for the bad language Mum! 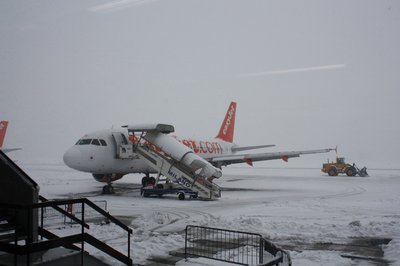