Tales from the land they call down under

Where the beaches are plentiful and the sun quite often shines

I landed in Sydney on a glorious, but very early saturday morning and was picked up by my good friend from back home Gunny, I had not seen Gunny for about 2 and half years, so after an emotional hello we went back to bed for a few more hours kip! When we eventually got up we made breakfast, in true Gunny style he had what was very nearly English bacon, certainly the best I had tasted since leaving England and English recipe beans to boot! You can take the Gunny out of England, but you cannot take the England out of Gunny!

Gunny lived in a area of Sydney called Coogee, I had actually been here many years before during my first visit to Oz back in 2002. Nice part of Sydney with a good beach and a couple of good boozers, including the Coogee Bay Hotel (CBH), which is famous for been the biggest pub in the Southern Hemisphere! God knows why Gunny choose this location!

As it was a lovely day we trotted down to the beach and gave a surprise hello to a slightly hungover Danny and newly wed missus, Gemma! Danny later informed me that he thought Gunny had got talking to one of the local beach bums when he first saw me, though to be honest he never has been the sharpest tool in the box!! With Dan's comments in mind it wasn't long before I treated myself to a hair cut whilst I was in a country with hair dressers that I trusted, only a slight trim you will be pleased to know….

After an afternoon reminiscing and catching up with my old friends I moved my stuff to Danny and Gemma's house where I would have my own room, this was a luxury I had become accustomed to been without! I must say that both Dan and Gemma were very good hosts and looked after me well, though Gem I never did get that Sunday lunch with Yorkshire puddings and Gemma also kept feeding me up on chocolate...

That first night we spent celebrating Gunnys girlfriend Amelia's (yes all those of you that know Richard, that is not a typo! He has actually netted himself quite a catch) birthday in the palace pub. Between all my friends from back home they had managed to meet lots of other like minded people and I wasn't long before I was getting on well with them, I was trying to think of a saying that would sum up this sort of situation, but could only come up with shit attracts shit, but that doesn't quite get the message across in the right way….. or maybe its does :-) Thinking about it I think thats not even a real saying and could be a Matthew Walkerism...... By the way congratulations to Matt and Rachel on news of their pregnancy!

I would have nearly three weeks in Oz, for the first few days I took the opportunity to catch up with some business I had to sort out back home and generally lead an almost normal life but on the other side of the world and with a 9 hours time difference from England! I would goto the gym, do shopping, clean up the house, make cakes and many other things that probably are not not very interesting blog topics, I suppose I am just trying to emphasise that it no longer felt like I was backpacking! Though to be honest I could hardly afford to step out of the house, Australia certainly isn't a cheap place with the pound being so weak, a schooner of beer, thats 425ml, not even a pint is about 5 quid!!

One of the main reasons for having a longer time in Oz was that one of my friends Phil was coming all the way from England for a two week jolly! I think in hindsight he wishes he had a bit longer, but still was good to see him. Phil arrived on the Thursday and all four (Dan, Gemma, Gunny & I) of us picked him up, Gunny and I had been on the beach followed by the CBH all afternoon and were a little inebriated so say the least. We were also in the dog house also we were meant to be cooking for Dan and Gem and instead had to be dragged out of the pub to pick up Phil, not without getting a pie and mash from the world famous Garlo's I might add! This was the first day of Gunny's two weeks of holiday from work and he was already getting me into trouble! 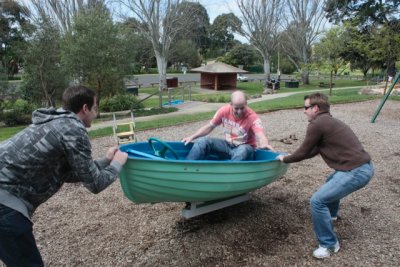 That night we went to the Kings Cross area for another one of our friends birthdays from back home, Jo! Jo is over from England on a working holiday. We topped up our alcohol levels a little bit more and talked about the weekend to come, celebrating Jo's birthday up in Terrigal in a swish pad we had rented out.

The next morning another one of my good friends from back home Noel also arrived in Sydney, Noel is moving over to Oz for the foreseeable future so it was really good timing. Love it when a good plan comes together! 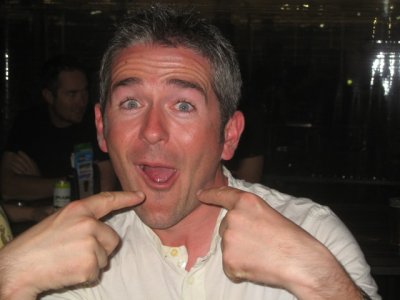 On a sunny friday we set off on the 90km or so drive to Terrigal, as you can see the pad we stayed in was pretty nice to say the least!! The idea of the weekend was to make the most of the house, soak up the sun by the pool and celebrate Jo's birthday in style. We were really lucky with the weather, bearing in mind that Sydney was in middle of spring we were having days where the temperature was getting into 30's, not bad really! We did have an incident where we got caught in a rip tide down at the beach, I wasn't too worried as I got my gold swimming badge at the age of 10, but a couple or the guys had a bit of a fright, just goes to show you how dangerous the Ozzy sea can be! 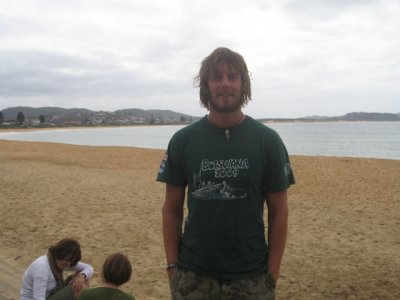 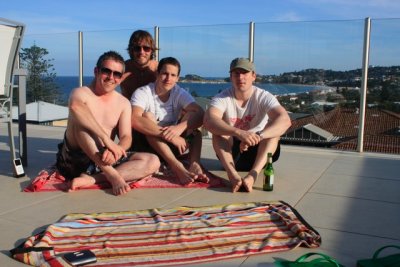 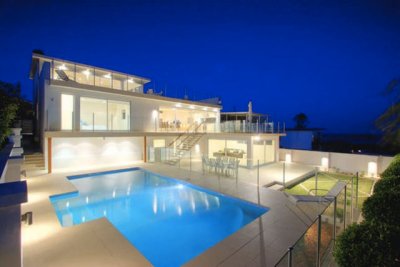 Though we were in this plush pad my sleeping arrangements had gone distinctly downhill, both Noel and I being the gentleman that we are offered to sleep on the floor as there were not enough beds for everyone, OK it was because we are tight yorkshire man came and were happy not to pay full whack for a bed. We ended up sleeping on the top floor of the apartment, we woke up at the crack of dawn next morning boiling hot, partly due to it having no curtains and also virtually all the walls were actually windows, from that morning on it was labelled as the green house! The second night I slept underneath the staircase to try and get away from the daylight and Noel slept underneath the glass table…… though he did get woken up in the middle of the night by a bird that had sneaked in and started shitting all over him, bird of the feathered variety, of course!! 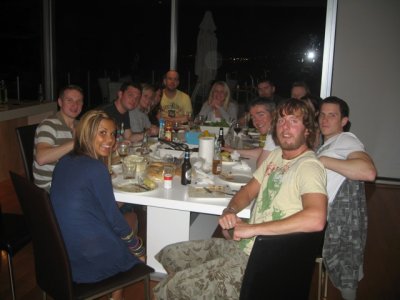 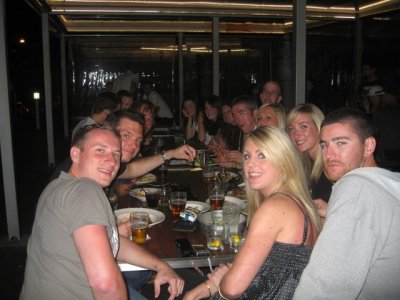 After getting back from Terrigal we had a few days and nights of Manly beach, obligatory opera house visit, drinks in Bondi, watched bizarre red sand storms & playing the odd game of poker! Gambling is massive in Oz, I played poker a few times and actually found myself really enjoying it and can certainly see how people get addicted. Don't worry Mum I am not going to gamble away the house, the extent of my poker playing was confided to 20 dollars one night at the rugby club, 9 dollars in the Melbourne Crown Casino and M&M's. This leads nicely onto our next road trip, The Great Ocean Road (GOR)!! 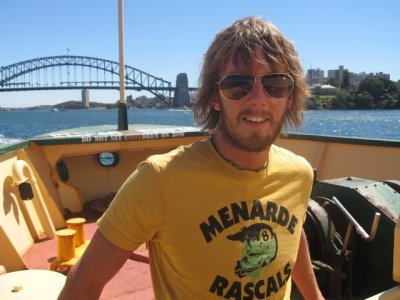 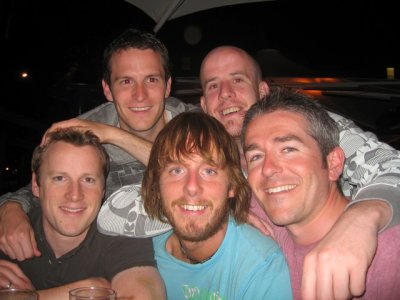 On another splendid sunny Friday morning we grabbed a taxi to the airport and headed to a not so sunny Melbourne. The rest of the day was spent looking round, couple of hours in the casino, food and drinks in st. Kilda all whilst it rained! Whilst in Melbourne we were meeting up with my old college friend Phil, who has also literally just emigrated to Australia and would joining us on the GOR. Another really good opportunity to see a good friend that I had not seen for nearly a year and if I were not to see him in Oz would probably not see him for another 2/3 years. Anyone would have thought this was planned……. Couldn't be further from the truth…. 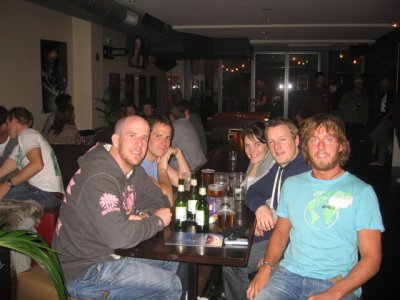 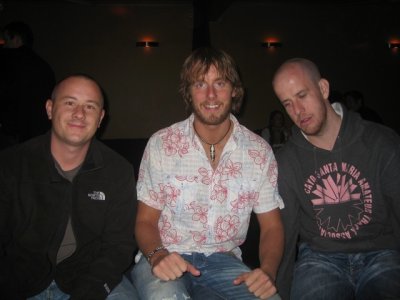 After a our night out in Melbourne we picked up the the mini van and hit the road, no sooner had we left Melbourne the rain started! It rained and rained, when we eventually got to the ferry on the Mornington Peninsula it just about stopped raining, so much for the scenic drive down. Still sprints were still high so we had a few games of poker to pass the 45 minute ferry crossing and ate skittles. 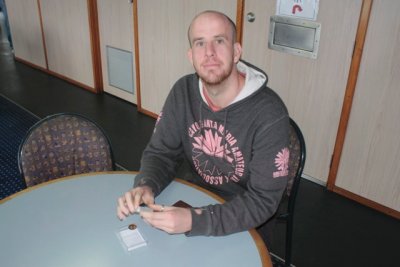 We would have two nights on the GOR which would be spent at Lorne and Port Campbell, I had done the GOR back in 2002 so I thought it was rather nice to see all the attractions but in much stormer and far moody weather than my previous visit. We saw all the main highlights which included the lighthouse from going round the twist, Bells Beach, the setting for the great old time classic Point Break starring Patrick Swayze, the 12 apostles and some of the most stunning ocean scarred scenery I have ever seen. Whilst on the subject of Patrick, it was only about a week after his tragic death and you can be rest assured he was in all our thoughts during our visit to Bells beach. 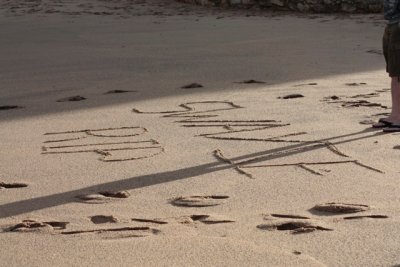 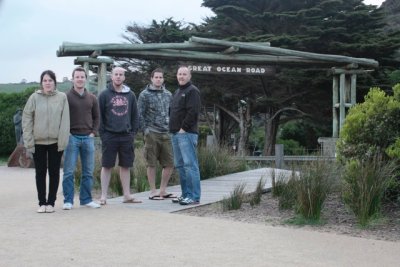 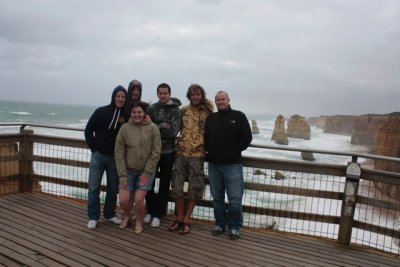 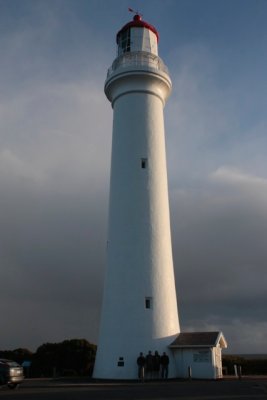 We spent our Saturday evening in the Lorne Hotel and experienced a genuine local yokel evening complete with dodgy band, fight and Gunny betting all his hard earned cash on some silly game called Keno and the greyhounds! This time next year Richard Gunn will be at gamblers anonymous, fact! 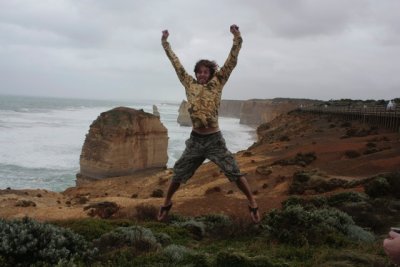 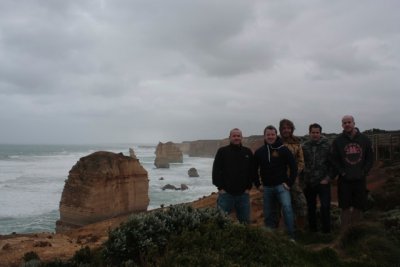 Back in Sydney my time was coming to an end so after a day chilling and 'surfing' on Bondi we all had a nice leaving meal in Darling Harbour and early the next morning I got my next flight to Christchurch, New Zealand for my next adventures……. 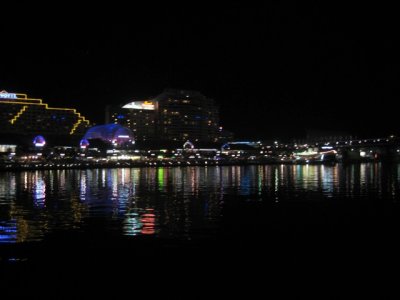 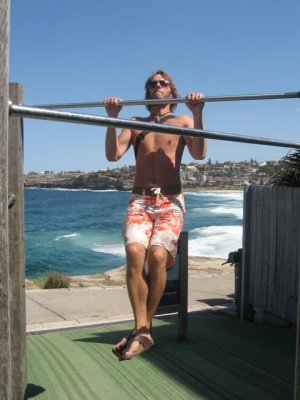 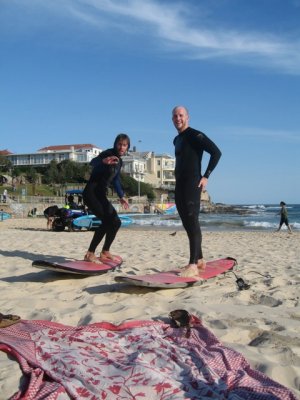 What did my time in Australia mean to me? The answer to that is that is meant a lot, it was like home from home as I had so many good friends from back home there Gunny, Gemma, Danny, Phil, Jo, Noel and Phil 2, all made my visit memorable and homely. Sydney was also the new people that I met virtually over night and enjoyed their company immensely, there are too many to mention but I am sure they all know who are they are. Australia is the place where the sun nearly always shines, the waves nearly always leave you for dead and the scenery is literally jaw dropping. Sydney for me was a nice break from all the trauma of travelling and enabled me to have an actual home for a few weeks, some of best days I had were just pottering around the house with Gemma (who is also now pregnant, lets hope is gets it genes from the Banks side), watching Ellen and eating chocolate!

So whilst I left Australia having to say goodbye to many good friends and that in itself made it hard, many of them will be back home by the time I get back and many of them are making goods lives for themselves and I couldn't be more happy for them! Bon voyage, until the next time!