My last month in the alps has been action packed!!

March has been a good month!! It has brought many powder days on the slopes, sunshine, along with plenty of partying, a couple of road trips, good food, free stuff and some good friends to share it all with!!

I had my old school friend Dave out along with his lady friend (Miranda) and Jo and Rich, whilst the week they chose didn't give them the best conditions this did not stop us from having fun fun fun!! Monday night is half priced chicken wings at MBC, which both Dave and Rich were well up for!! A fun night out eating 'cheap' chicken wings, very quickly to the ladies disgust took a much more sinister direction and became a 'how many wings can you eat contest'. It wasn't a pretty contest and at one point Rich could be seen dipping his chicken wings in his beer to cool them down, so he could eat them faster!! We also made him drink the fat soiled beer.... At this point I think the girls found the whole thing physically sickening, but we were past caring and were more concerned with our male ego's! In the end it was a draw at 32 chicken wings each..... 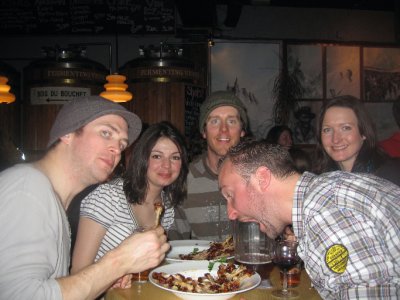 Another night out with Dave + crew saw a new friend brought to the group Mr Crab!! Mr Crab was 'acquired' from a seafood stall in the centre of Chamonix. All was going well, Mr Crab was keeping us entertained, that was until Rich introduced him to some other lads in the bar, seems they weren't too keen on him and booting him half way across the bar!! Lets just say he made quite a mess and the bar staff were non too happy! See me sporting Mr Crab, before his tragic accident; 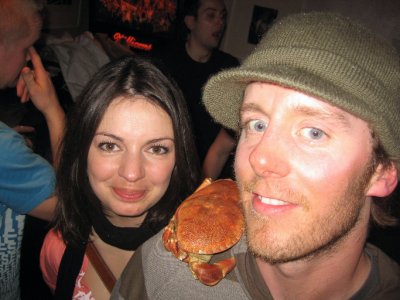 March sees the Boss de Bosses competition in Chamonix this is Europe's biggest inter-resort moguls contest ... a festival of skiing, snowboarding and telemarking that brings together some of the finest mogul skiiers from Europe's top alpine resorts. The event, which started as inter-resort rivalry back in 1990, has now grown into an international competition for the much-coverted trophy. For spectators it's also a fantasic day out which includes not only some fantastic skiing but also parties, piste-side barbeques, top DJs, live bands and sometimes very silly fancy dress! 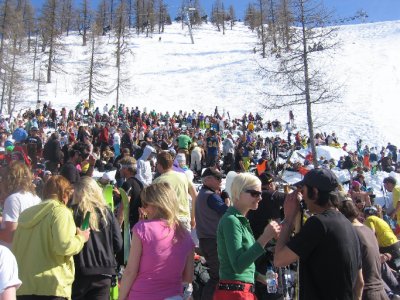 For many years now I have wanted to do the famous Valley Blanche and last Sunday me and 4 other did it in glorious sunshine!! The Vallée Blanche is probably the most famous ski run in the world. The only competition comes from classic downhills like the Hahnenkamm or the Lauberhorn, which are fairly pedestrian affairs for recreational skiers. Dropping from the Aiguille du Midi at 3880m to Chamonix at 1100m, the Vallee Blanche is in a different league. The figures speak for themselves: 2780 vertical metres of skiing - that's nearly three vertical kilometers. 9200 vertical feet. One and three-quarter miles. And that's straight down. Follow the slopes and you have the longest run in Europe at 22km (13.7 miles). Plenty of time to admire the spectacular mountain scenery that has been drawing tourists to the region since Mont Blanc was first climbed in 1786 by two French mountaineers, Jacques Balmat and Michel-Gabriel Paccard.

The adventure starts before you get your skis on. At the base of the Aiguille du Midi cablecar, you can feel this isn't just a normal ski run. As you mill around doing the normal Chamonix things like looking for a parking space and queuing for lift passes, you can sense it. People are wearing harnesses. The ratio of guides to tourists is off the scale. When did you last see an ice-axe or crampons in Val d'Isère, St Anton or Castleford snow dome? The photos are pretty much self explanatory, the Valley Blanche really does give you a taste for how dangerous snowboarding can be when you get off the beaten track!! 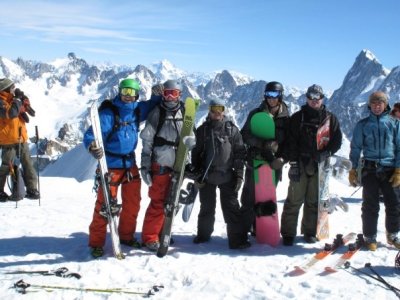 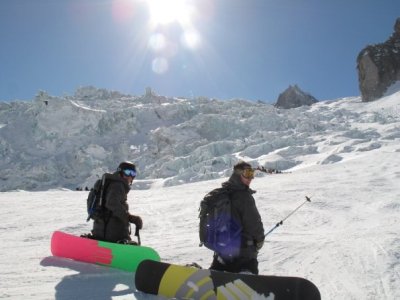 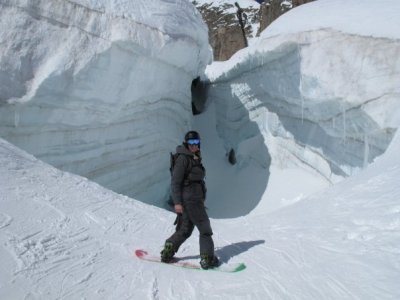 I have also been through the Mont Blanc tunnel twice in March, both times to visit the resort of Courmayeur in Italy, Courmayeur is included in our Chamonix lift pass so its makes it a cheap day out! For those of you that have read my earlier postings you will know that I have had a couple of bad experiences using the tunnel before, namely the cost of the toll!! Though I did start having cold sweats on seeing the toll booths, things were a little less painless. One time I was on the free bus service and the other time we had done what I should have done in the first place and got a reduced ticket that we can get with our Chamonix season pass, far more easier to swallow at 6 euros each!! Courmayeur is a really nice resort with lots of trees to ride between, a good lift system and the restaurants also serve the best pizza at reasonable prices! Courmayeur can also experience much different weather than the Chamonix side of Mont Blanc, for example it can be cloudy in Chamonix and bright blue skies in Courmeyeur, the wonders of living in the shadow of Europe's biggest mountain!

I have noticed the older I get the more I seem to like to complain, in my youth I would have probably done the very English thing and said 'oh not to worry' if I was unhappy with something, just to avoid the award situation that usually follows!! The older I get the more I thrive on those situations and strive to get what I anticipated. Some people might say I am getting old and grumpy but I like to think of it as getting value for money! So after some new pants and jacket that I bought in Bulgaria started literally falling apart it didn't take me long to write an email to the manufacturers to express my disappointment in their product! My grumbling paid off and they sent me out 300 pounds worth of this seasons gear (the ones I had bought were cheap last seasons sale clobber), here I can be seen sporting the yellow pants and jacket with naked chicks on (maybe not what I would have chosen, but as its free I cannot complain..... can I??) with a couple of friends from Chamonix, Steve & Nicky whist we were waiting for the bus in Courmayeur! 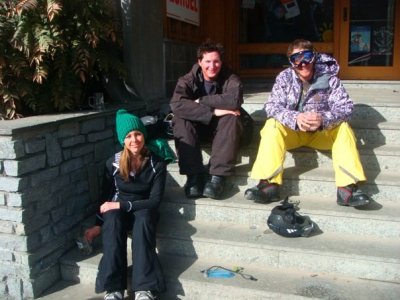 Some of you may remember that I went to the resort of Verbier for my 30th! As an ambassador of Verbier and its number one fan, I accompanied half a dozen intrigued Chamonians (that's probably a made up word I think) who were well up for a couple of nights in Verbier, so after I had done the Valley Blanche we set off. A car full of friends were already over there and Bertha got another 5 of us over to catch the end of apres! There was only going to be 4 of us staying for a couple of nights! Me and 3 ladies..... Maybe this is me getting old and grumpy again, but I like to get a good 7/8 hours sleep on average.... Maybe this is also me getting old but after we found out the hostel was full the thought of spending the night in Bertha with 3 hot chicks, didn't sound that appealing... I know people will call me a homosexual and tell me that stuff like that is what dreams are made of, but Bertha was designed for 2 adults, couple of small kids and maybe a alsation, max!!! I mean I only have 2 tea mugs for starters. Anyway we made the most of it, got drunk and in the end had an OK nights sleep! Once again on the last day Verbier also provided us with some really nice fresh snow. Here is me and Bertha roomies in the Pub Mont Fort; 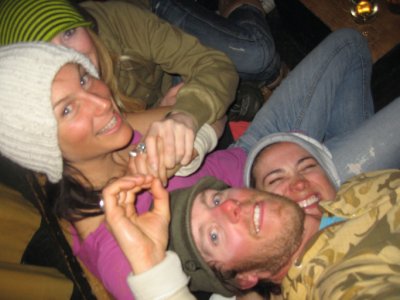 As I now finish this blog entry I only have 3 & half days left in Chamonix before Bertha and I depart back to England!! On the way back I am calling into see my god son Sam and his family in Wiltshire for his second birthday and then I only have a couple of days before I fly out to Delhi! The rest of my time back in England will mainly involve drinking few beers with friends, popping into work, having my Mum's Sunday lunch, eating fish and chips, English breakfasts and getting ready for the next stage of my trip.

I can honestly say that whilst I have enjoyed every minute of my time over here I am ready for a change, the season is starting coming to an end and most of the snow in the village has melted. Some days in the valley feel like the middle of summer, though you wouldn't think I was riding in armpit deep snow only a few days ago! Leading the seasonaires life in a ski resort like Chamonix in a camper van has been life changing and something I will never forget, there has been highs (mostly) and lows but I wouldn't change a thing. I have met some life long friends during my time and have fulfilled a dream! I really will be sad to leave, but I guess it will not be long before I am experiencing something totally different and just as satisfying!

I will leave you with a couple of photos from some of the great days in March; 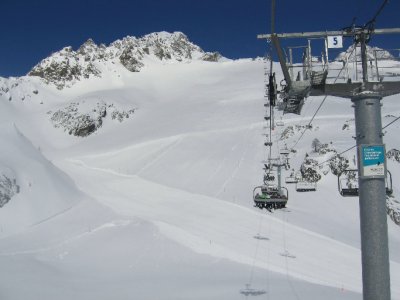 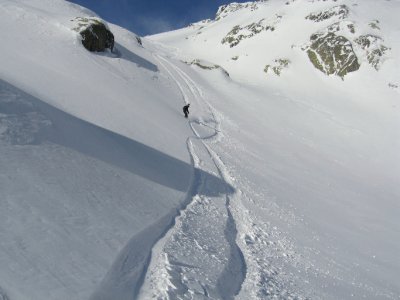