Since my last blog its pretty much been same old, same old!! By day going up on the mountain and by night catching up with friends, saying in and the odd night out! Therefore I thought I would give you an insight into the day to day life of living in a beat up 26 year old VW camper van in the French ski resort of Chamonix!

Most mornings start by me taking my arms out of my decent sleeping bag and pealing the duvet cover back over my head. Which over the night as it gets progressively colder, magically works it way so that is it totally covering my head!! I would keep the heater on over night, but it doesn't like working much after 11pm! The main problem with sleeping virtually outside in the open air is that breathing in air thats somewhere in the region of minus 25 is not usually that pleasant!

If its been snowing and its going to be a powder day I mearly grin and bare the cold and get dressed and get on with making breakfast! If its just a bog standard day then it can take a good 30 minutes for me to find the energy to crawl into the drivers seat in my PJ's and start the engine for 5 minutes which is what is require to get the heating fired up! That said the last few mornings have been quite warm, in comparison to the others, so maybe the 'warmer' spring mornings and days are on the way.....

Breakfast usually consists of a cup of tea, followed by warm Weetabix or porridge & prunes and if I am really lucky a glass of fresh orange! When I first came out I used the cook exactly like I would at home, meaning cook it all in a pan use a couple of spoons and then eat the porridge out of a clean bowl! This very quickly went out of the window as I realised the amount of washing up this created. I now boil some water in a pan for my tea, make the tea and use the same pan to boil the milk for my breakfast. I then also use the same spoon I used to make my pot of tea to both make and eat my breakfast out of the pan I cooked it in! This cuts down my washing up overheads quite considerably and I can honestly say I have not eaten breakfast out of a bowl for months! I guess its an example camper van evolution!

So I have now managed to get dressed as fast of possible to avoid any of my extremities dropping off and force myself into the shower cubicle which also doubles as a place to hang up all my wet gear and give the teeth a brush (Mum I know you will be pleased that I am still keeping up to the high dental hygiene standards that you instilled us as kids!)

On the subject of hygiene here would be an appropriate opportunity to talk about how I actually shower whilst living in a van. I have already mentioned that I have a shower in the van, but to be honest its a real squeeze and the water supply is frozen most of the time, which leaves me with bottled water... This would obviously work out pretty expensive showering in mineral water and with the bottled water is also frozen most of the time too, I can imagine it not been a very enjoyable experience either! When I first came to Chamonix I used the sports centre facilities, whilst it was nice having a swim most days it proved quite expensive at 5 euros a day or 11 euros including the sauna! It didn't take me long to find out that there was a nearby hotel that a friend (all thanks go to Jenny Coffin) was staying at that also had a jaccuzi, sauna, steam room and didn't seem to have anything in place to make sure that you are staying at the hotel! Therefore a big thanks goes out to the 3 star Alpina Hotel http://www.bestmontblanc.com/en/alpina.html that have most days kept me in tip top condition for the past 2 months! The receptionists seem to know my face now and the goggle tan is not doing me any favours, so I suspect my days could be numbered, maybe I will get myself a couple of disguises, might watch a couple of episodes of Boselecta for inspiration! I know if I worked in a hotel and someone went to the effort of dressing up as scary spice just to get into the sauna I would let them in!

Going in the jaccuzi and sauna everyday has meant that all in all my personal hygiene has been pretty good, would be a bit of nightmare were is like a 3 month festival! Though that does bring me onto another topic, washing and ironing! Living in a van obviously means that you don't just have a washing machine to hand, therefore a trip to the laundry is a half day task and has to be planned. This does mean that items do tend to get a little bit of an extra wearing than they would normally do, in particular the underpants and socks, due to them not being in abundance!! Clothing undergo's a sniff test at each use and the decision on there usability is made based on what the item of clothing is and also what activities I have been up to in the said item! It should be noted that luckily France is also now non smoking so that does help in keeping things slightly fresher, Switzerland on the other hand is not. In terms of getting things ironed, I really don't think I will use the word iron in the rest of my travel blogs unless its in the context of waxing my snowboard or trying to explain some kind of metal object I encounter on the rest of my journey.

Back to my day, once I have got myself ready comes the part of clearing the windscreen. This could involved removing copious amounts of snow from the van and 9 times out of 10 scraping the thick ice that has accumulated from the condensation inside the van. Once I get the van going, which is usually not too bad unless it has been extremely cold during the night, I drive to one of the 5 / 6 separate areas of Chamonix. When I first came out I didn't like the fact that Chamonix as a ski resort has 5 / 6 separate skiable areas, but in hindsight I now quite like this as it gives Bertha a run out and to get to three of them I have to pass the bread van. The van is run by a nice lady and its part of a shop in the centre, this patisserie does the best baguettes and almond croissants that I have found in the area (believe me I have tried them all!). Each morning I tend to get one baguette and an almond croissant for later, except on the mornings when they have run out of almond croissant's which is usually a very sad day for Mr Watson! The lady who works there now knows me and almost has my order ready before I have finished my greeting and first sentence of 'Bonjour Je Vou....', my French has actually got slightly better since been out here, but I am far from fluent. If only I had listened in French lessons at school instead is messing around at the back of the class with Ste Whiteley...

Once I pull up and get parked and I jump in the back again and make my sandwich for the day. I have a little fridge which I keep the basics in. When I first got here I used to turn the fridge on all the time, it works on electricity or gas! It didn't take me long to realise that the fridge stayed plenty cold without the use of the gas or electric. Making the sandwich can be quite tricky, main reason is that baguette's make crumbs and crumbs, vans and enclosed spaces don't really go very well! Once the sandwich is made its stuffed into my trouser leg pocket and off I go to get the lift! Just goes to show you that something like making crumbs can be a real pain in the camper, so be warned......

After a day out on the mountain some of your gear can get damp or even on some days soaking wet. That means when I get down first thing is to get the heater going and get all my snowboarding gear hung up in strategic places around the van. I then drive back to my normal parking place which is usually near the sports centre just back from the road slightly, been pretty happy with this spot as its quiet and I have never had any trouble. 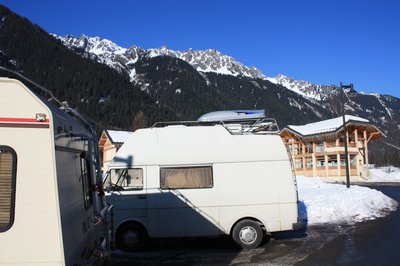 Once I am settled for the night its time to batten up the hatches and try and keep as much of the heat in as possible. This is mainly done by closing the curtains that my super dooper auntie Marge made for me and making sure that a couple of draughts by the main sliding doors are covered with the curtains and an old towel, though to be honest I sometimes think I am flogging a dead horse on this one! Now its a case of seeing how long the heating lasts and nipping to the hotel Alpina or the gym if I am feeling flush!

I eat out a couple of nights a week, namely Monday's are half priced chicken wings at the MBC and I have been known to have a Poco Loco or Midnight Express if the apres ski gets the better of me, these do pretty good burgers and steak and cheese sandwiches respectively! When I eat in the van it tends to be either pasta with a sauce or soup, obviously also using the stringent use of cutlery and pots exercised at breakfast time. I don't seem to eat nowhere near as much meat over here as I did back home, back home virtually every meal I had except perhaps breakfast would have some kind of animal part contained in it. Meat in France is ridiculously expensive and hence is probably the main reason I haven't been eating so much, though I have been making up for it on the bread front by eating nearly a full baguette each day!

I then usually have time to read a book or check my email (intermittent wifi that I can pickup in my parking spot permitting) before the heater cuts out and its time for bed!

Well that about wraps up my day to day itinerary for van life, for those of you that have been reading my previous post entries you will know that the van heater has been a topic of discussion on many of my entries. I now actually feel that Bertha and I are at peace and I am pleased that I was stubborn and pigheaded enough to stick with her....... I might almost go as far to say that I am actually enjoying it.....