More snow than you can throw a stick at!

So what have I done?? On the way back from Milan I went via the ski resort of Verbier, this is a resort which I know and love and would be spending my 30th birthday partying with the lads in the not too distant future!! I also thought this would avoid the Mont Blanc Tunnel and stop me incurring any further tolls, what can I say I am Yorkshire man! Unfortunately my journey took me though the The Great St Bernard Tunnel, a series of small tunnels and the main 6km long tunnel at a cost of just 34 euros!!! I was obviously none too happy about this at the time and it got me thinking, people go on about that amount of tolls in France and someone always pipes up with, oh but the French don't have to pay road tax.... Which is bloody great for them, but what about us that pay English road tax and then have to pay the tolls too?? I mean do the French contribute to the upkeep of our roads when they drive in England??? Not that I know of!!

Anyway I had a good day riding in Verbier, really nice weather and even met some other fellow boarders to ride with for the day!!

So what have I been doing for the past few weeks? As you have guessed mainly snowboarding, the week I came back from Bulgaria some friends were over from England, we had fantastic conditions as you can see and lucky old Neil even got shat on by a bird (of the feathered variety unfortunately)!! 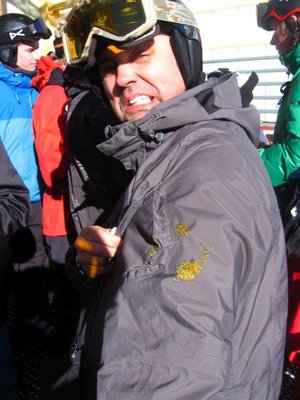 During this week I did the run of my life, from the top of the Grand Montets at an elevation of 3300 meters we encountered waist deep untouched powder fields that you just floated across, I pretty much did the whole run with my hands up in the air shouting this is the best run I have ever done as loud as I could! Everybody I was with that day put it as the best run they have ever done, they all had plenty of weeks riding under their belts too so that takes some doing! I can only think getting dropped on a mountain via helicopter can surpass that!!

As you all know I have been having problems with the van, namely that I had very little heating! Now I am one for roughing it but at temperatures of minus 25 things can get a little cold at night. Now luckily for the last week of Jan I had my friends Matt and Rachel with their little boy Bradley coming out, so with a bunk bed with my name on it I set off on a snowy Friday morning over to La Clusaz!! As I got lower the snow turned to rain, I also decided to take for more scenic route (the fact it was avoiding the tolls had nothing to do with it) via the resort of Megève!! Unfortunately the higher I got the rain turned back to snow and as I came to the very hairy mountain pass the snow was really coming down. With only 12km to go I decided I better brave the cold and put the snow chains on Bertha, I can safely say it was the coldest my hands have ever been. Now words cannot describe the levels of cold involved when you are on a very high mountain pass in gale force winds and its snowing heavily, but the thought of a warm cup of tea only 12 clicks away made me get on with it, just imagine what words came out of my mouth after finishing one wheel I realised that I had stupidly fitted it to the front wheel when its rear wheel drive!!! What a nob!!

Once the chains we fitted things don't get much better.... After doing a few more kilometres I am told that the mountain pass is closed due to avalanche risk!! After putting a diversion in the Tom Tom it would seem I would have to go another 65 kilometres to get to La Clusaz!! Still with the thought of a warm bed for the night in the forefront of my mind I decided to truck on. With about 35 kilometres to go and approaching a roundabout I went to press the brakes to find I virtually didn't have any!! All of a sudden the tolls sounded like the better option!! It should be noted at this stage torching Bertha actually crossed my mind!!

I managed to make it to Matt sisters chalet even without any brakes and with some weird noises coming out of Bertha!! The next morning I sluggishly drove to a petrol station and jacked up Bertha, to my amazement the drivers side wheel was loose and seemed to wobble!! I then drove to a village called Thornes where I left it at the VW garage! As it was now the weekend I couldn't do much but wait! A big thanks to my friend Jo who phoned the French guy and conversed with him on my behalf, at this point I was pretty sure it was a wheel bearing and thought that I would surely have change out of 100 euros...... When Jo phoned you can imagine how over the moon I was when she told me the bill was going to be nearly 500 euros!! With not many other options I told them to get on with the work, a couple of days later I picked her up as good as new!!

Now at this point the van was starting to get on top of me a little, I mean I can handle the cold and the lack of internet connectivity but its a nightmare getting all your stuff dry without the heater working properly!! So up until this point I was half thinking about getting some accommodation in Chamonix for the rest of the season and had even started making enquires.. With Bertha costing me an extra 500 quid I thought i better make the most of a bad situation and try and last it out for the rest of the season, I had an idea of what the heating problem was so I phoned my mate Craig and asked him to send some parts over with some friends that were coming out to Verbier for my birthday, watch this space... Here is inside Bertha one tea time; 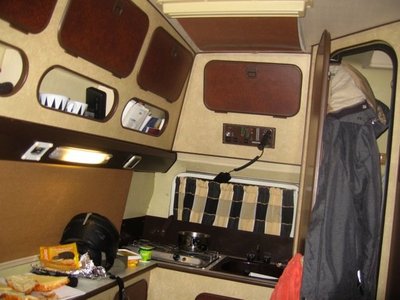 So all in all had a really nice week in La Clusaz, another couple Jane and Lofty with their little boy Zac came out for most of the week too, here we all are having a birthday meal for Bradley and I (his birthday is the day before mine). The food was good but the bill was even better... Matt and Rach ordered the beef to share at what they thought was 34 euros between them, unfortunately it was 34 euros each, those who know Matt will believe me when I say his face was a picture when we got the bill and the journey home in the car was very quiet to say the least!! 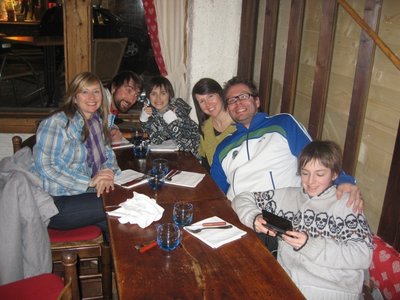 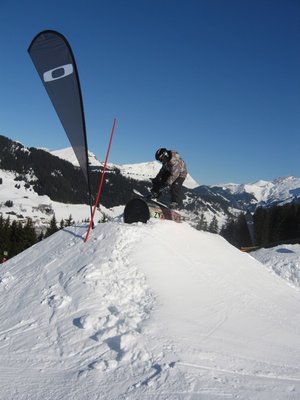 So straight after Matt and I headed over to the party town of Verbier where we had a very nice apartment for the week, we were going to be a day early so we had a night in Bertha in the sports centre car park, Matt and I lived in this car park for 2 weeks a couple of seasons ago, so its like home from home!

For anyone who has been to Verbier I am sure they will agree that its probably one of the best ski resorts for apres ski, the Farinet with its live band, 15 Swiss franc 4 pint pitchers, roof that opens, dancing on the tables and shots down a ski should be one of the great wonders of the world... As you can probably see from the photographs the week has just about everything going, great snow, great friends and happy times!! I have never been one to celebrate birthdays but I guess I had to celebrate my 30th!! We had a great day riding and it followed by over 12 hours of fun, fun, fun, couple of photo's are on here and many, many more on Facebook!! Thanks for everybody involved for making it such a memorable day / week!! May I add that I maybe now the ripe old age of 30 but I was pretty much the first one up every morning, the last one in every night and went riding everyday!! A true machine!! 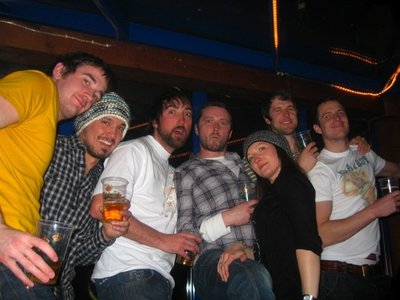 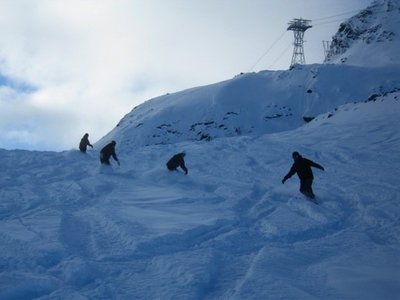 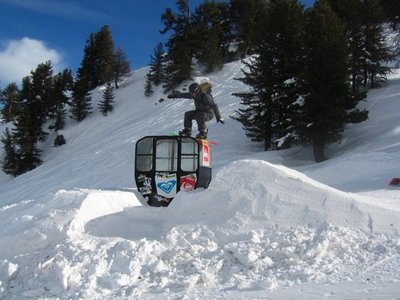 As you can see I have been working on the goggle tan quite a bit; 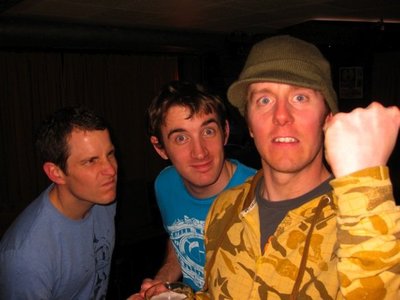 As I started writing this blog entry in the Rhododendrons, Chamonix yesterday it was still snowing outside, I am now finishing it off sat in a toasty warm van after a blue bird powder day on Flegere. In fact out of the past 5 days 4 (one day the mountain was closed) of them have been some of the best powder days I have ever ridden in, we are talking snow balls deep and even in some cases over waist deep. I really think I have fallen in love with Chamonix and its awesome terrain, I can now see why people keep coming back year on year, when you have the amounts of snow that we have had over the past few weeks Chamonix really is a snowboarders mecca! 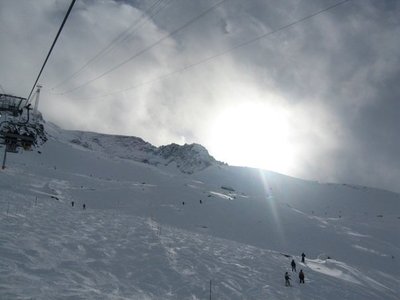 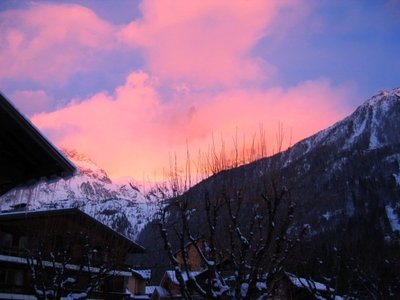 Here is Nick skiing in the powder in Flegere; 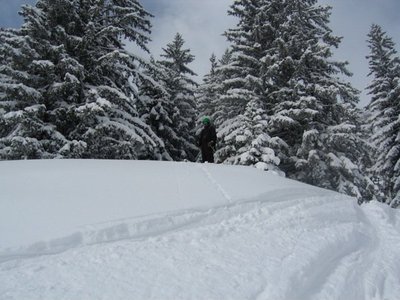 All this snow has also made me realise what a dangerous place Chamonix can be, I have therefore treated myself to a avalanche transponder, shovel, probe and new bag to carry it all in, Happy 30th and all that! Lets hope I never have to use it...

That about brings you up-to-date with the currently situation, I am on a snowboard course for for three days next week. Hopefully I should start really progressing my freestyle riding so watch this space for pictures & video of me knocking out 360's and maybe the odd flip...... Just remember you don't have to land it to claim it!! Buddmeister I will be ready for ya!!

One last thing, I guess I should let you know about what happening with Bertha..... Well it appears that my attempts to fix, which involved me crawling around in the wet & snow for about 3 hours seems to have partially worked..... Lets just say I think Bertha and I may have come to some agreement on the heating arrangements that both parties are happy with, for the moment... I will let you know how I get on!!